Am I the only one experiencing IMAP (and some other) RB performance problems?

I’ve been noticing slow performance with my mail client. I opened a trouble ticket nearly 18 hours ago, and it’s still unassigned? I was going to update the ticket to let them know a few other issues I’m seeing and I even had problems logging into support.runbox.com to do that.

Yet the nodeping chart claims everything is 100%? It’s all very strange. I am not having problems with my connection in general.

I know we’re all going through a lot right now, and most of us are working from home, but I seem to recall having read something from RB that said that many of them already do work from home. I haven’t been able to find any update more recent than April 17. I love RB, but is everything (and everyone) OK over there? I surely hope so!

We aim to respond to support requests within 24 hours but often much sooner. I’ve just responded to your ticket just now and am working through others.

I am not aware of IMAP issues today and the NodePing report is correct in that respect.

Yes, we generally work from home or remotely from various locations and Runbox is not affected in that respect. What problems did you have logging in to support.runbox.com?

I’m sorry if I came off as a little frustrated. I truly do appreciate you guys (and gals!) at Runbox and what you do. I have replied with further detail.

Not at all. Things are a bit slower today with support replies, but everything is fine and as I say,normally we get to replies much sooner.

I am having problems with imap and rb7. Rb7 hangs on login page. Cannot connect to imap. I have raised a support ticket. Same problem for my client who has his email domain at Runbox. This is urgent because we are in the midst of a lockdown and we have important ongoing communications with government offices. 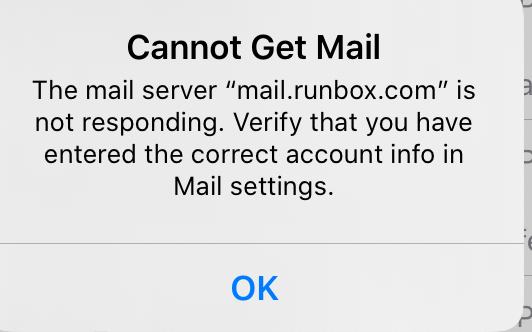 I am, too. I am getting 504s every time I try to connect. Even the webmail is having issues. Are we under attack? There’s supposed to be 27K messages in here.

The IMAP server is down. 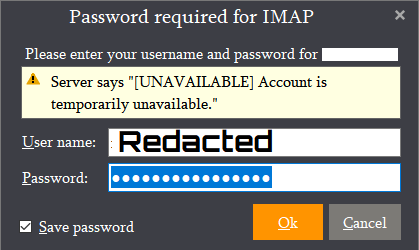 We are currently seeing problems with some of our Dovecot servers which is affecting IMAP/POP access for some customers. We have a status post about this here: https://status.runbox.com/2020/03/02/imap-pop-issues/

Apologies for the inconvenience.

Thought you should also know that BSB blacklisted my domain for four hours on April 17th. Y’all know what that was about?

I believe their servers are being used in a botnet. You were down on April 17th, too. The coincidence is too much.

The whole reason I opened my trouble ticket on April 20 was that the very post you linked included the words “This has now been resolved.”

If I had known the issue was still ongoing, I would not have added to your workload with a new ticket (or this thread.) Thanks

Thanks for your messages.

We are working hard to resolve these problems and suspect we have hit a bottleneck related to our network file system or the network itself due to growth in users and usage.

We know you depend on Runbox for your communication and we apologize for the problems you are experiencing. We greatly appreciate your support while we work to resolve these issues.

An overview of our status updates can in the meantime be found here: https://status.runbox.com/

up today still having problem with IMAP synch. Pllease review the issue and advise ETA

We suspect faulty hardware in one of our storage units and are now restarting and upgrading it, while initiating acquisition of a replacement server.

@Geir due to the IMAP issues I’ve been using the Runbox webmail interface (RB7) but that is also having serious performance issues (for me at least, and apparently the OP).

Does RB7 use the same IMAP infrastructure on the backend?

Regarding the wider issue, is there a plan to build in some redundancy into the infrastructure? If this is caused by a hardware failure on one of the units this would suggest that there is no redundancy built in.

That many people are sick of Google? Wonderful.

@gtf21 Even when using a local search index, Runbox 7 relies on a backend API to retrieve message data from the same storage units as IMAP and POP. Therefore issues with the storage units will have effects for all actions that involve accessing messages.

In the Runbox system, message metadata is also stored in a database which allows the webmail (Runbox 6 and 7) to list messages, folders, and other account content without accessing the storage units. IMAP on the other hand inherently relies on files on disk and is therefore affected to a greater extent even when simply listing folder contents.

We are considering options for architectures that provide greater distribution and isolation, as well as redundancy. First of all we need to resolve the most urgent issue at hand, which involved migrating data from one of our storage units to a new replacement server.

We will keep you posted about this at https://status.runbox.com.

I wish I could say the same. It took multiple minutes to download just 3 messages totaling 244KB, over a 140Mb connection.

I found out what went wrong. Apparently, the blacklist was too overarching in its scope. I will try to add the mail server to the whitelist and see if I run into the same issue again.