It is my pleasure to announce Runbox 7 Contacts… again! You may have noticed them already, but they’ve been pretty basic so far, providing less features than the Contacts interface in the old webmail. Today is the day we change that, bringing the Contacts to the same standard as the Webmail itself.

One of the key parts of the new Contacts (and mostly the reason why they took so long!) is changing the way we store your contacts in Runbox. So far, they’ve been sitting in our database, with no other way to access them than through the web interface. This has been a significant annoyance to those of you who would like to use your contacts across many different apps and devices, not necessarily related to Runbox itself.

As of today, this changes. From now on, all contacts will be stored on a CardDAV server – an open standard for sharing contacts and address books between different devices.

If you know what CardDAV is, chances are you were eagerly awaiting it and need no further encouragement to use it. If you’ve never heard of it before, here’s two key benefits it has over the existing system:

Of course, having all those details can sure make the interface a bit big and complicated – and in fact, the Runbox 7 Contacts interface doesn’t (yet!) have support for all of the things that vCards can contain. This does not make them useless though – far from it. And that’s thanks to the fact that…

Transforming all the contacts that Runbox currently has into this whole new format may sound like a big undertaking: and it is! And like with any data, there’s a chance that something will go wrong with the conversion. We did a lot of testing internally, but there’s still a chance that something has slipped through the cracks, and one of your contacts will turn out in a different way that you thought it would. This is why the migration to CardDAV is opt-in for now – meaning that nothing will actually get converted and moved to CardDAV until you ask for it. We also won’t be removing any of the existing contacts from our database – at least until we’re sure that all of them have been migrated successfully and everyone’s happy about it.

Until you migrate your contacts (we’ve provided a handy button for that) they will not be available for synchronization yet. Migrating them will move them over to CardDAV and give you all the glorious new features of Runbox 7 Contacts. No other visible changes should occur – but if they do…

If you find anything wrong with the new Contacts, please let us know! If something didn’t end up as it should after the migration, if some data shows up incorrectly in other apps, or if something is just plain broken or missing in the web interface, don’t hesitate to complain. We’ve put a lot of effort into testing the new contacts, but with almost 20 years of serving email to our customers we know how creative you people get :­) So if anything can be improved, let us know, and let’s create the best Contacts we can – together.

I just tried migrating my contacts as described but keep getting “Internal server error OK :(”.

Not very helpful! Can this be fixed please?

Hey,
I checked the Runbox 7 Contacts and those are showing up.
Before I switch to the new sync rule I would like to know how to sort them.
I’m used to sort the contacts by Last name, but no sort tool in Rbox7.
Maybe some hint? Thanx!

@richardm thanks for letting me know! I looked into our logs and I think I’ve identified and fixed the issue; can you let me know if it works any better now?

@Vlado indeed, it looks like there was is no way to sort them just yet in RMM7 – silly me :­) I’ve implemented basic sorting and will hopefully roll it out in the next few days. Thanks for pointing it out!

Tadeusz, I just tried to add the Runbox community summary email "community@runbox.com" to my contacts. I didn’t have any contacts as of yet, so it was the very first one. I used the email field, the “Nickname” field, and the “Business” field. Now that it’s saved, it won’t let me click on the contact to edit it, and there’s nothing listed in the sidebar to say what contact it is. 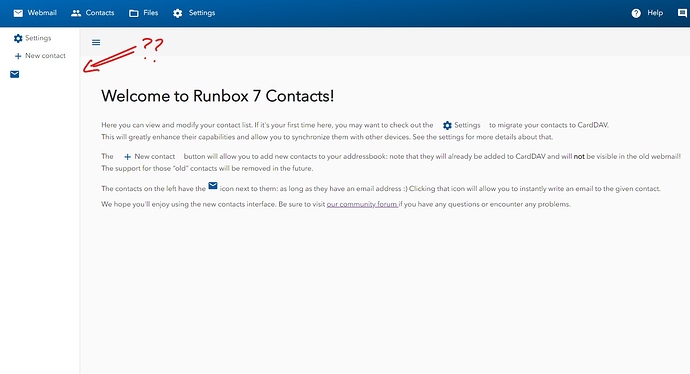 Is this a bug, or did I do something wrong?

Also, will we be able to add contacts directly from emails received in Runbox7 in the future?

@jstick oops, that’s definitely a bug :­/ It’s an oversight of mine, since the names on the left side panel show the first and last name only: and since your contact has neither, nothing shows up. You did nothing wrong: I have :­) Fortunately it’s a small thing; I’ll fix it first thing tomorrow and deploy as soon as I can so that this doesn’t happen anymore.

Thank you for pointing it out with a detailed explanation! As for adding contacts directly from emails, I’ll check with other team members to see what would be the best way to add this to Webmail. Thanks for your feedback!

A new version of Contacts has been deployed today, fixing a couple of issues:

@richardm I’ve identified the issue that was stopping you from getting your contacts migrated; it should all be good now. Thank you for your patience and feedback!

@Vlado the contacts now have sorting options, by first or last name, ascending or descending. Let me know if you’d like to see more :­)

@jstick the contacts with just nicknames are showing up now. There is a currently a bug however that breaks sorting when any such contact exists: I already wrote a fix for this and I hope to roll it out to runbox.com later today.

Hi Tadzik,
something is wrong. The sorting tool is sometimes there, sometimes not.
The bad thing is when the tool is displayed and selecting a sorting type from the dropdown menu nothing happens.
Refreshing the screen the tool disappears completely. After few other refreshes or by leaving and returning to Contacts it reappears but is unresponsive.
This all on Mac (macOS 10.14.4) running Safari 12.1 The same situation on iPad (iOS 12.2) and same Safari.
Additionally there are some design things, but on this later.

P.S. I prefer to stay on the “old” Runbox CardDAV and CalDAV which works perfectly in Apple environment. In Contacts even the contacts pictures and company logos are transferred between devices flawlessly. PLEASE don’t touch the “old” implementations! Fore sure I would NEWER use the Runbox7 with all the new things pushed in it.

@Vlado I’ve just rolled out some fixes to contact sorting, hopefully it works better now. Meanwhile I’ll make sure it all works as intended on Macs and iPads – thanks for pointing it out.

As for the PS: the existing CardDAV and CalDAV is here to stay and not going away – the whole thing with RMM7 Contacts is to provide a web interface that will allow you to edit them in the browser as well all the devices you’re already using. The old webmail could not do that, as it maintained its own list of contacts which you could not sync with any other devices, which is quite limited in its usefulness.

It will probably take a while for Runbox 7 Contacts to become as good as other CardDAV software is – currently you can consider it a bit of a beta. Feel free to ignore their existence for now if they disappoint you, but I hope some they’ll be good enough for all your needs :­)

After clicking to Migrate them, nothing happened, though a message that I had 381 contacts in the old style that haven’t been migrated yet.

Some weird things are going on in Contacts. After the most recent change the sorting works, but:

When selecting Last name, it sorts by Last name but the First Name is first on the left side

That is by design, yes: sorting was meant to just change the order without altering the way the contacts are displayed.

Most recently created contacts remain on list top, whatever the Last name or First name is

I was not able to reproduce this; having created „John «Newguy» New” he gets rightfully stuffed in the middle of my list and reacts to sorting order properly. I can investigate and fix it if you can give me a more detailed example that’s broken.

Noted; the next thing on our radar after Contacts was the Calendar, which turned out to be a lot simplier than Contacts were and most of the hard work has already been done on that. Files over WebDAV is something I kept in the back of my head as the next thing to tackle – I’ll be sure to evaluate it after the other projects give me some more room :­)

Sorry to see you leave, but bye, and thanks for all your feedback!

@nickilove Migrating 381 contacts can take a little while, and the UI doesn’t currently do a very good job communicating that it’s doing something potentially time-consuming under the hood.­ It’s possible that if you check it now, after some time has passed, the contacts will have been all migrated and ready to use – if not, please send me your Runbox username in a private message and I can take a look if there was any holdup in the migration.

The migrate button worked this time, but I now have duplicates of the majority of my contacts! Not all, but most.

Could this be because, having clicked the “migrate” link (with 122 contacts), the app updated itself and when it had finished it said there are 84 contacts to migrate, so I clicked the ‘migrate’ link again?

I don’t know if these are true duplicates or if the migration has separated out some data into each one… Do I have to check through all the duplicates and manually delete as necessary?

Could this be because, having clicked the “migrate” link (with 122 contacts), the app updated itself and when it had finished it said there are 84 contacts to migrate, so I clicked the ‘migrate’ link again?

Ah, yes, I can see why it could have happened :­/ I have manually(-ish) fixed it for you to the best of my abilities: you now have 122 contacts in both the old database and CardDAV – let me know if anything has gone missing or mismatched, but I’m pretty sure it should be a-okay :­) Sorry for the confusion and thanks for your feedback and patience!

I too, have 2 to 3 listings for each contact. I don’t see how to group them as I have them in R6. Please advise–thank you.

@nickilove if you can send me (maybe in a private message) your Runbox username I can look into it. Browsing and editing contact groups is almost done; I hope to be able to roll it out tomorrow.

no rush, my username is info@purpleparadiseresort.com

Hi Nicki,
I’ve cleaned up your DAV contacts now; looks like you got a whooping 336 duplicates in there :­) I’m
reworking the migration mechanism as we speak so that this kind of problem doesn’t happen anymore.

Meanhwile, enjoy your contacts and I hope they’re all good now :­) Thank you for your help!