I just sent an email, composed and sent entirely within webmail. I had to save it as a draft and work on it later.

I came back and finished it with no apparent problem. But then I happened to click the Drafts folder, only to see that a copy of the email still appeared to remain. I clicked to different folders, hoping to trigger a refresh, but every time I went back to Drafts, the phantom message was still there.

Here’s where it gets weirder: I then opened Thunderbird, where my account is configured via IMAP. It showed nothing in the Drafts folder, as I would expect.

I decided to switch back to RB6, to see how it reported the Drafts folder (empty). And when I switched back to RB7, the phantom draft was finally gone. Does RB7 handle drafts differently as compared to other access methods?

Thanks for reporting this problem – I have reproduced it and repurposed this issue describing it with a reference to your post: https://github.com/runbox/runbox7/issues/58

I have another issue and I’m not sure it’s related, but I mention it here because it seems like it might be relevant: I can now see one of those phantom drafts in the Draft Desk on the Compose screen, without even clicking on Drafts. See the following screenshot: 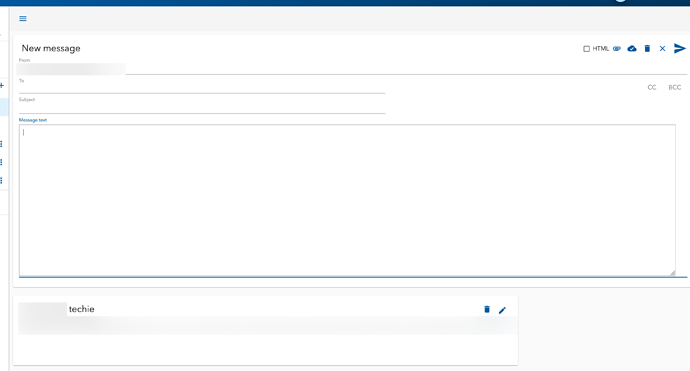 I don’t recall that happening before.

Just bumping this, because I wasn’t sure if you’d seen my followup after your reply.

@wmrbf Sorry for the late reply.

Do you mean that a blank draft appears when you click Compose? Or did it appear on the Draft Desk without clicking anything?

What I mean is that when I click Compose, messages in the Draft Desk automatically appear beneath the compose window, which is made shorter to accommodate them. The draft in the screenshot I provided isn’t blank – it was redacted before posting.

The Draft Desk is a nice feature, but it should only appear when I click on it. At least, that’s how I hope it’s intended to work.

@Geir Thanks for reporting this problem – I have reproduced it and repurposed this issue describing it with a reference to your post: https://github.com/runbox/runbox7/issues/58

I see that the GitHub issue is still open, is this because you cannot reproduce this again? If so, I would like to report that I have this “issue” as well on Runbox 7 webmail. If it not too bad, but slightly confusing whether I have sent something or not.

@Geir …likewise, I can report that this issue continues for me as well.

wmrbf, A similar thing happens with the “mark as unread” bug, where an email can be repeatedly marked as unread and the counter goes up at infinitum, even though it is only one email. And again you can clear it by reverting to RB6. I have a feeling that all this relates to the indexing of emails, which is a feature of RB7. We have to just hope that all these bugs get fixed before the final version is released.

While I very much appreciate the thought, in this case I can confirm that the issue reported in this thread does not seem to have anything to do with indexing. I stopped the indexing and that did not clear the drafts. Neither did reverting to RB6. In fact, both messages in the Draft Desk were waiting in the RB6 Drafts folder.

And as I half expected, they were still in the Draft Desk when I then logged into RB7.

What RB6 does have that is helpful for this problem (and which RB7 lacks) is a handy button to empty the entire Drafts folder in two clicks, so thank you for that!

@Geir, please consider the previous sentence an RB7 feature request, even if the original problem remains as yet unfixed!

You may be right that it is not an indexing problem.

Anyway I can confirm that I can duplicate this problem. Firstly when I looked in drafts I could see an old email which I had already sent out. When I went to the composer screen this showed a new blank email (apart from “from” field) ready to fill out. I then scrolled down below the black email and found the old draft email displayed below it. What is more it keeps black emails as drafts, which does not make a lot of sense. You can individually delete the drafts, but that should not be necessary if they are blank or have already been sent. But I read @Geir post on GitHub and I am not sure it is the same problem he is describing.

I appreciate what you are suggesting with regards an “empty folder” button, like RB6, is a feature request.

Thank you for the updates – I have increased the priority of this issue now and assigned it.

I have also created this issue:

On the Drafts Desk, add a button to empty the Drafts Desk by deleting all existi…ng Drafts (with a confirmation dialog). Ref: https://community.runbox.com/t/drafts-not-always-deleting/1049/10

Thanks, @Geir! Your efforts are very much appreciated!